On Saturday, April 8, 2017, we went on a school trip to Newark. – “Why Newark?” Because in Newark there are two places closely related to the war and post-war emigration of Poles. There is a cemetery of Polish airmen and presidents in exile and Newark Air Museum, where some Polish squadrons were stationed during the Second World War. 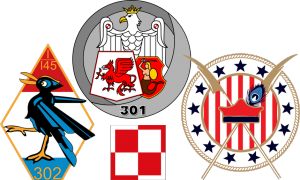 Pupils from the bilingual class and 2a, 2b, 3a, 4a, 5a, 6a, GCSE and A-level classes arrived at the school car park just after 9am. We divided them into three groups – each group took the number of one of the Polish squadrons:

We first went to the Newark Cemetery. During the trip, the pupils of Squadrons 302 and 303 participated in a game called “Mr. Nowak Changing Socks”. The game was to write down the car registration numbers on the highway and to write the funny sentences in Polish from the letters found on license plates. The ideas were nothing but laughter. Here are some of the sentences (although some of them really hard to translate:

Pupils from the 301 Squadron during that time recalled the names of Polish cities and rivers and played the word games. They waited impatiently for the end of the road. The most active players were awarded with stickers of Polish national symbols and places and events that students would learn about during the trip.

At Newark Cemetery we were greeted by Councillor Laurence Goff who takes care of this important necropolis for the Poles. In this place lie both Polish and British airmen who fell during the Second World War. He guided us with great enthusiasm and passion through the cemetery grounds and a small museum organised in the cemetery chapel.

The pupils enthusiastically participated in a trip to the memory of the Poles, who gave their lives in the struggle for a country that is now one of their homelands. They were surprised to find Polish symbols and graves of brave fighters. At the cemetery there are mostly graves of pilots from 301 and 302 squadrons who were stationed at nearby airports. The pupils of the 303 Squadron happily undertook the task of finding the pilot’s grave of their “squadron” and successfully found it. You should have seen how proud they were. On the other hand, pupils of the 302 Squadron managed to find the grave of the youngest fallen pilot. 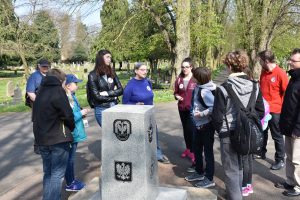 We also visited a very important, though little known monument called “Warsaw Air Bridge Memorial”. In itself modest and inconspicuous, it commemorates some of the bravest heroes of World War II. In 1944, 250 pilots lost their lives trying to provide the necessary equipment, weapons and supplies to the Warsaw insurgents. Poles as well as British and South African airmen flew over to Warsaw with help.

During the visit to the Newark Air Museum, the children of the 301 Squadron solved the picture puzzles and although it was not an easy task, they all found the correct answers. The most exciting part of the trip for them was the chance to visit the cockpit of a plane and a helicopter. They enthusiastically listened to the history of the valiant Poles. 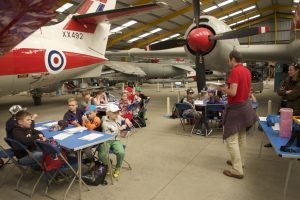 Pupils of the 302 Squad learned about the situation of Poland just before the outbreak of World War II, and they were looking for places they or their parents came from on the map of the Second Polish Republic. We talked about the defence war of 1939, defending Westerplatte and the attack of the Soviet Union on Poland on September 17, 1939. It was a great surprise for us that three children were able to correctly answer the question – “How big was the the crew of the Polish transit warehouse on Westerplatte”. They all received a souvenir from the museum shop for their hard work. We completed the lecture with an interesting and funny story of Miki the Monkey, which played tricks on the 302 squadron pilots stationed in Britain at that time who supported the Brits in the Battle of Britain.

The students of the 303 Squadron after a short lecture on the participation of Polish aviation and army during World War II visited a museum exhibition and found a plane marked with Polish checkerboard. 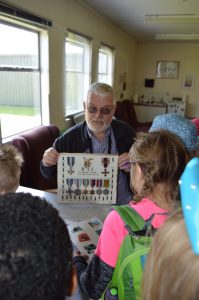 Thanks to courtesy of the museum staff we had the honour of learning about the brave Polish pilot – Edward Wojan, who fought in Poland’s defense war in 1920. We have seen his medals that were donated to the museum by the aviator family, and in particular we admired the Virtuti Militari medal, which he received for merits during the Second World War.

This trip was a remarkable history lesson for our students, one that is learned through meeting and contact with the place of the past. For a long time it will remain in the memory of children, who also had the opportunity to spend time together, get to know each other and play. What a pity that time went so fast and after 6 hours we had to go home.

The Newark Cemetery is cared for by Friends of Newark Cemetery – a group of volunteers who devote their time to keep the cemetery in good order, organise cemetery tours and various cemetery events throughout the year –  Annual Air Bridge Memorial Service at the end of September and the Memorial Service on All Souls Day Sunday at the end of October. More information about them can be found on their website – http://friendsofnewarkcemeteryuk.weebly.com/, on their Facebook page – https://www.facebook.com/groups/friendsofnewarkcemetery/ and the facebook page of Mr. Laurence ‘Goff’ – https://www.facebook.com/laurencegoffnewark. At this point, we would like to thank the Friends of Newark Cemetery and, in particular, Mr. Laurence Goff, for taking the time and all the help provided.

We also thank the amazing staff of the Newark Aviation Museum for helping with the organisation of the tour, in particular Mr. Howard Heeley for guiding us through the museum grounds and telling us all the interesting stories about the contributions of Polish aviators to the fighting during World War II. More information about the Newark Air Museum can be found on the museum’s website – http://www.newarkairmuseum.org/.