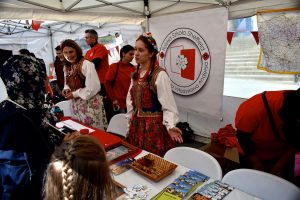 Red and white at Barker’s Pool in Sheffield

On Sunday, May 7th, 2017, we celebrated Polish Heritage Day with the local Sheffield community. We started early, at 8am, with a visit to the BBC Sheffield Radio studios where we talked about the history of the Polish community in Sheffield and what is going on at Barker’s Pool that day. Recordings from the meeting can be heard on the BBC Sheffield radio website at http://www.bbc.co.uk/programmes/p05128df (from 1h 11min recording).

The day before TV Sheffield Live came to our school and made a report about our us, what we do and what will happen in Sheffield on Polish Heritage Day. You can watch the programme on-line below:

For 5 hours at Barker’s Pool you could try delicious Polish delicacies: cakes, buns, donuts and traditional Polish bread. Between the Sheffield City Hall and the John Lewis Building we set up three white tents over which fluttered two Polish flags. On site you could learn more about not only the history of the Polish community and the Polish School in Sheffield, but also about Poland itself and the possibilities of holidays in Poland. You could also see traditional Polish costumes and learn more about your past thanks to the Kresy Family organisation and Mrs Ewa Szegidewicz. Children could learn Polish legends, make Polish flags, dress up in traditional Polish folk costumes and play together. There were also Polish and British scouts who organised a signgsong  and sang together, danced and enjoyed themselves.

We also had an honour to have on site:

We would also like to thank very much for all the support and understanding the City Center Management team from Sheffield City Council. Without them this event would not happen.

You can see photos from the event on Flickr, our Google+ profile, or by clicking on the information below. 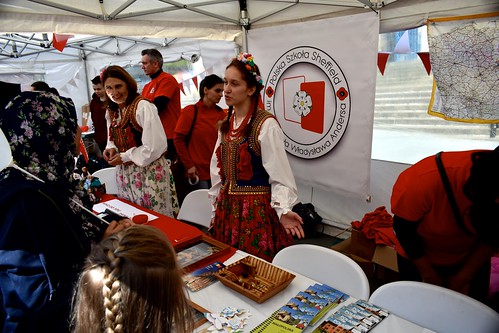 You can also read more about the event in the local press:

Polish School in Sheffield was founded at around 1950. We teach children of polish origin (3 year old and above) polish language, literature, geography, polish history, heritage, culture, tradition and religion. We do prepare student for polish GCSE and A-level exams.

We are a community school – fully managed by parents of the pupils and volunteers. All the money we have come from subscription fees and donations received from various companies, organisations and people of good will. All people working at the school are volunteers – nobody gets paid. We meet about 20 times a year, every other Saturday, between 9:30am and 1:15pm at Parkwood Academy, Longley Avenue West, Sheffield, S5 8UL. After school there are brownies, cubs and scouts meeting organised by Polish Scouting Association.

Polish Heritage Day is a new initiative of the Polish Embassy in London inviting to celebrate openness, appreciation, and better understanding between the Polish community and the wider British society.

Taking place in various locations on 6-7 May 2017, celebrations will take the form of numerous events, shows, picnics, and lectures organised by the Polish diaspora in cooperation with local councils, Polish Saturday Schools, and Polish-language Roman Catholic parishes. Intended as an annual festival, Polish Heritage Day is planned for the weekend after the symbolic date of 3 May, when in 1791 Poland proclaimed its modern codified constitution as the first country in Europe and the second in the world after the United States – a symbol of freedom and equality. 2 May is also celebrated in Poland and in Polish communities around the world as the Polish Diaspora Day and Polish Flag Day.

Project’s logo is based on the design of the white-and-red chequerboard – a symbol painted on the Polish airplanes during the Battle of Britain 1940. During the Battle, Polish pilots constituted the second largest Allied contingent after the British. During World War II and later in the time of communism, the United Kingdom was the refuge of the Polish Government-in-Exile and free Poles. The Polish community is a mixture of the descendants of those wartime and anti-communist exiles and those who decided to move to Britain after Poland joined the EU in 2004.