Responding to the appeal of the Embassy of the Republic of Poland in London and heartily supporting such a noble idea, we decided to organise Polish Heritage Day in Sheffield.

On May 7th, 2017, at the Barker’s Pool in Sheffield, in the heart of the city, between Sheffield City Hall and the John Lewis Building, we will celebrate the Polish Heritage Day. This is a perfect opportunity to celebrate our shared history and culture. There will be many attractions, both for adults and children. And it’s all free!

You will be able to taste some Polish delicacies, homemade cakes, see an exhibition dedicated to the history of Polish Education in Sheffield, watch our chronicles documenting the school’s activities over the years, play together with Polish and British scouts. The Polish Family WWII History Group will come to us, thanks to which you will be able to try to find your Polish roots and learn about your ancestors and where they come from. You will be able to see and dress up in traditional Polish folk costumes and learn more about Polish customs, traditions, culture and history. There will be many attractions for children, everyone will surely find something for themselves. 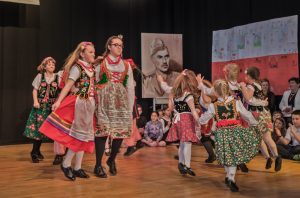 We have launched a special website dedicated to Polish heritage Day in Sheffield – http://polishheritage.polskaszkolasheffield.org.uk. The site contains all the essential information about the celebrations itself.

We encourage everyone to like our Facebook page and Google+ profile, and follow us on Twitter at @SzkolaPLShef. All up-to-date information on Polish Heritage Day and the celebrations itself is published together with the #PLHeritageDay hashtag. We encourage you to use this hashtag and track it. In the coming days, we will share with you many interesting facts connected with Polish traditions, history and culture. Share this information with your friends, family and friends and invite them to join us on 7th May in Sheffield.

Polish Heritage Day is a new initiative of the Polish Embassy in London inviting to celebrate openness, appreciation, and better understanding between the Polish community and the wider British society.

Taking place in various locations on 6-7 May 2017, celebrations will take the form of numerous events, shows, picnics, and lectures organised by the Polish diaspora in cooperation with local councils, Polish Saturday Schools, and Polish-language Roman Catholic parishes. Intended as an annual festival, Polish Heritage Day is planned for the weekend after the symbolic date of 3 May, when in 1791 Poland proclaimed its modern codified constitution as the first country in Europe and the second in the world after the United States – a symbol of freedom and equality. 2 May is also celebrated in Poland and in Polish communities around the world as the Polish Diaspora Day and Polish Flag Day.

For more information about the project, follow #PLHeritageDay on social media and visit the virtual map below:

Project’s logo is based on the design of the white-and-red chequerboard – a symbol painted on the Polish airplanes during the Battle of Britain 1940. During the Battle, Polish pilots constituted the second largest Allied contingent after the British. During World War II and later in the time of communism, the United Kingdom was the refuge of the Polish Government-in-Exile and free Poles. The Polish community is a mixture of the descendants of those wartime and anti-communist exiles and those who decided to move to Britain after Poland joined the EU in 2004.